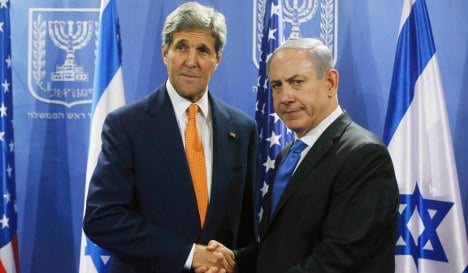 US Secretary of State John Kerry (L) will head to Rome on Sunday for a meeting with Israeli Prime Minister Benjamin Netanyahu. Photo: AFP/Pool

"They will discuss a number of issues, including recent developments in Israel, the West Bank, and Jerusalem and the region," State Department spokeswoman Jen Psaki said in a statement Wednesday.

Kerry's dogged nine-month pursuit of a peace deal between Israel and the Palestinians collapsed in early April amid bitter recriminations on both sides.

Speaking on Sunday to a Washington forum also addressed by the Israeli leader, Kerry vowed: "I won't give up."

But he acknowledged that after Netanyahu called snap elections in March it was unlikely any fresh peace negotiations could "resume tomorrow."

"There is an election in the next few months now in Israel, and the Israeli people will have important choices to make for their future," Kerry told the Saban Forum, organized by the Brookings Institution.

"And we look forward to working closely with the new government, whatever its composition, whenever it is formed," he said, vowing the US "will absolutely not involve ourselves in any way in the middle of the choice of the people of Israel."

But Kerry again insisted however that the current status quo in Israeli-Palestinian relations was unsustainable, adding "ongoing unrest had brought new traumas to everybody."

News of his trip to Rome came amid continuing tensions in the region and as a senior Palestinian official died Wednesday after being struck in a confrontation with Israeli forces during a protest march in the West Bank.

Netanyahu told the forum that it was the Palestinians fault that the peace talks had collapsed.

The "talks ended because the Palestinians wanted them to end," the Israeli leader insisted.

The Palestinian leadership "is simply not prepared… to confront violence and fanaticism within Palestinian society," said Netanyahu who has also sacked his justice minister Tzipi Livni who was the chief Israeli negotiator in the talks.