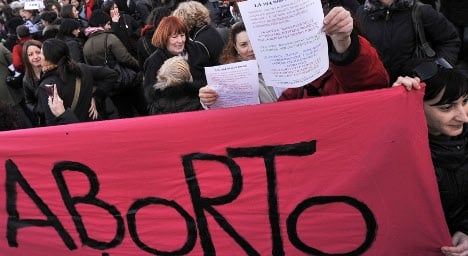 Women carry a banner at an anti-abortion protest in Italy. Photo: Andreas Solaro/AFP

There were 103,191 abortions carried out in Italy in 2012, 6,850 fewer than the year before, the national statistics agency Istat said.

The figures put the country’s abortion rate at 7.6 per 1,000 women aged 15-49; the fourth-lowest rate in Europe behind Austria, Germany and Greece.

Estonia has the highest abortion rate in Europe – 23.7 per 1,000 women – followed by Bulgaria and Sweden.

But the Italy figures were doubted by doctor Silvana Agatone, who is president of the Laiga association campaigning for the application of the country’s abortion law. Although hospitals must provide abortion services under Italian law, many doctors refuse based on religious grounds.

“They count the number of abortions that are done, but they don’t study the amount of requests.

“I can’t do more than 20 abortions a week, even if there are 50 women waiting outside,” she told The Local.

SEE ALSO: Why doctors in Italy refuse to give abortions

Agatone argued that there is much greater demand for terminations than official statistics show, with some women going to illegal clinics when they are not able to access public services.

“Those who want an abortion in the fourth or fifth month of pregnancy often go abroad,” she said, as women are unable to find doctors to perform the procedure in Italy.

According to the Istat figures, terminations in 2012 were considerably higher among foreigners than Italian women.

Foreigners undergoing the procedure were on average two years younger than their Italian counterparts.