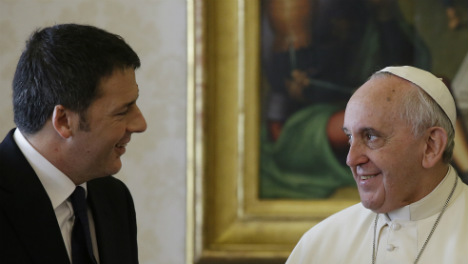 "Attention focused on, among other issues, the current context of persistent difficulties of an economic and social nature, with negative consequences especially in relation to youth employment," the Holy See said in a statement.

"In addition, the importance of education to promote the future of new generations was emphasised," it added.

The long-scheduled audience came the day after a general strike that saw tens of thousands of Italians take to the streets in boisterous protests against government policies that are struggling to haul the recession-bound country out of the economic mire.

The main target of complaint is the Renzi-backed "Jobs Act," which seeks to stimulate job creation and new hiring by making it easier for companies to lay employees off, and cutting labour security and severance rights during the first years of a worker's contract.

The pope and Renzi also "shared their serious concerns for the gradual worsening of conflicts in the Middle East," the Vatican said.

Rome will host talks between US Secretary of State John Kerry and his Russian counterpart Sergei Lavrov and between Kerry and Israeli Prime Minister Benjamin Netanyahu over the next two days.