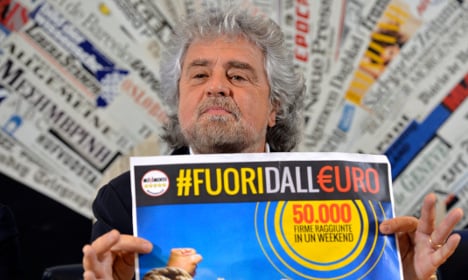 Beppe Grillo holds a “Out of the euro” campaign sign in Rome. Photo: Andreas Solaro/AFP

Just a week after launching his “Out of the euro” petition, Grillo said tens of thousands of Italians had signed up to be part of a popular vote on Europe’s single currency.

“I’m not fighting for my children, I’m doing it for me because I hope to have a few more months left to live!” the comedian-turned-politician joked. “I’m doing this for us, now. We don’t have more time.”

Against a backdrop of rising unemployment and no signs of economic growth, Grillo told journalists the situation in Italy is getting worse by the day.

The Five Star Movement (M5S) leader was flanked by four of the fresh-faced politicians who have characterized the youthful party, who collectively rallied against the “anti-democratic” decision to join the single currency in 1999.

Giorgio Sorial, vice president of parliament’s budget commission, said the “catastrophic” lack of growth was due to Italy having to bend to Brussels’ rules.

“We don’t want to end up like Greece,” he said of the southern European country, which is still struggling to recover from the financial crisis and risks a snap election early next year.

EU countries which didn’t take up the single currency are far better off, Sorial claimed.

Despite the group’s strong anti-euro stance, the Five Star Movement, however, has no intention to campaign for Italy to withdraw its EU membership.

“We are asking for a popular referendum,” said Grillo. “We are bringing democracy to our country.”

The party’s push for a vote comes alongside calls by far-right leader Matteo Salvini to see Italy scrap the single currency. The Northern League chief last week said he missed the Italian Lira and described the euro as a currency for "Germany and financial oligarchies."