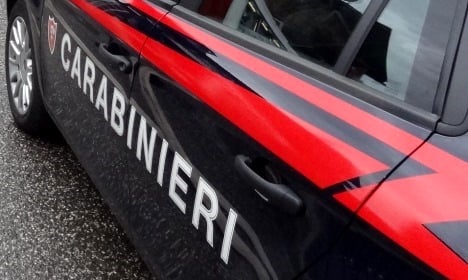 Police swooped on members of a group who have been accused of planning “acts of violence against institutional targets”. Police photo: Shutterstock

Acting on warrants issued by a court in L’Aquila, east of Rome, police swooped on members of the group who have been accused of planning “acts of violence against institutional targets”

Another 31 people were being investigated in connection with the group’s activities, which allegedly included attempts to procure arms and using social media as a “means for subversive propaganda”, Ansa said.

Police were due to hold a media conference in L’Aquila on Monday on the operation dubbed “Black Eagle" ("Aquila Nera") and were expected to release more details on the nature of the group’s activities and where the raids took place.

But the raids appeared to be unrelated to an attack on the high-speed train line between Rome and Florence on Sunday.

Train services were disrupted and there was widespread disruption to services after plastic bottles filled with petrol and firebombs were placed next to the tracks.

Investigators believe the attack may have been conducted by “No Tav” protesters opposed to the construction of a high-speed rail line between Italy and France.