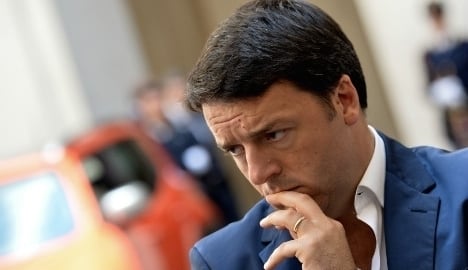 Italian Prime Minister Matteo Renzi was one of a number of politicians the group aimed to target. Photo: Tiziana Fabi/AFP

Members of Ros, the special operations arm of the police, conducted raids in several regions across Italy targeting members of a clandestine extremist group that modelled itself on a banned group called the “New Order” ("Ordine Nuovo") .

Fourteen members of the group were arrested and have been accused of planning a series of “acts of violence against institutional targets” that have not been seen in Italy since the 1970s.

Among those arrested was Rutilio Sermonti, a former member of the banned far-right group New Order which carried out a string of terror attacks in the 1970s and 1980s in an effort to restore the Fascist regime of wartime dictator Benito Mussolini.

Sermonti, a prolific writer, called for a new party to be created while the military leader of the group was identified as former police officer Stefano Manni.

Manni, a 48-year-old former police officer, is alleged to have stockpiled arms and openly discussed plans for attacks on political leaders and government institutions including the tax collection agency, Equitalia.

“This is the perfect historical moment to blow up Napolitano and his escort,” Manni allegedly said in one message. Police began monitoring members of the group in mid-2013 and telephone intercepts on a meeting held in October 2013 revealed the group’s extensive plans for specific terror attacks.

Investigators tapped conversations between Manni and another suspect, Franco Grespi, in which they referred to AK-47 assault rifles as "toffees" that they were trying to buy in Slovenia as well as explosives for bomb attacks.

"This the moment to strike, but not blindly," Manni allegedly said. "Banks, prefectures, police stations, Equitalia offices with their employees inside need to be hit". Tax collection agency Equitalia has already been attacked by anarchists in the past.

Riccardo Pacifici, the president of Rome’s Jewish community, congratulated police on their investigation saying Italian institutions were keeping a close watch on any attempt by anti-democratic groups to incite discrimination and violence for racist motives.