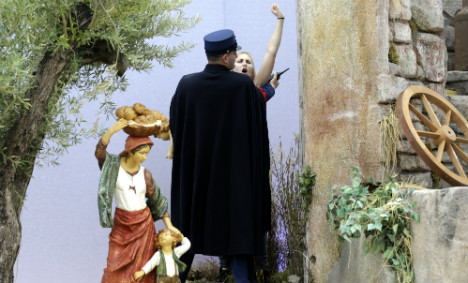 Ukrainian Iana Azhdanova was arrested and taken into custody on Thursday after she snatched the figurine in one of the feminist group's trademark topless protests.

She had faced possible trial in Vatican City for "disturbing the peace, obscene acts in a public place, and theft."

The judicial authorities in the papal micro state opted instead to ban her from the Vatican and Church properties elsewhere.

"He endorsed the arrest made by the police on Christmas Day for the crimes which she had contested. He ordered her release, while intimating a ban on entering Vatican City, the Basilica (of St Peter's) and other extraterritorial places," Lombardi said, according to Italian news agency ANSA.

Lombardi had said on Friday that the Vatican regarded the Femen protest as "extremely serious due to the setting and circumstances that intentionally offend the religious sentiments of a very large number of people."

While Azhdanova was released, Italian businessman Marcello di Finizio, who was arrested Friday for scaling the facade of St Peter's, remained in detention on Saturday pending interrogation by a magistrate.

Di Finizio was protesting over new EU rules governing tenders for beach concessions, which he fears could threaten his business on the northeastern coast.