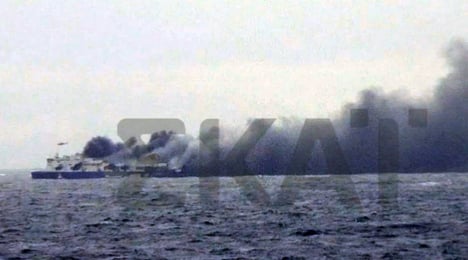 The coastguard said the man's body was taken aboard a patrol boat and was being taken to the Italian port of Brindisi.

It was not clear exactly how the victim ended up in the water.

Greek officials said a woman who had been in the same part of the boat as the deceased man had been rescued.

The name and nationality of the victim were not released.

In an update at 1630 GMT, the Italian navy said 317 of the 478 passengers and crew were still aboard the boat.

The navy also said that a tugboat, the Marietta Barretta, had finally been able to attach itself to the burning ferry, raising hopes it could be stabilised sufficiently to accelerate the evacuation of those left on board.