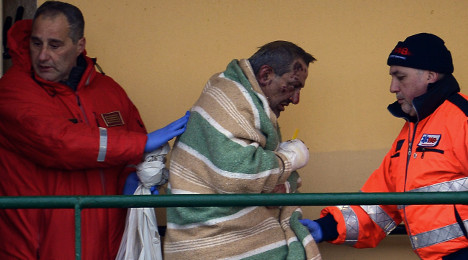 A wounded passenger (C) being evacuated from the burning ferry is helped by rescuers as he arrives aboard the Singapore-flagged cargo container ship. Photo: Filippo Monteforte/AFP

As the Italian navy battled to complete the evacuation of the stricken ship, Bari prosecutor Giuseppe Volpe announced a probe to examine whether negligence contributed to the disaster in which at least one passenger died.

The investigation will seek to establish how the fire started and why it was able to gain such force that passengers feared they would be burned alive or suffocated by thick smoke.

The Italian owner of the boat has insisted that the vessel was in full working order and had passed a technical inspection which included its firedoors on December 19th.

One of the first survivors to arrive in Italy on Monday has alleged that the staff were clearly unprepared for dealing with an emergency and appeared to be unaware of how to organise an evacuation.

The Greek passenger who died on Sunday was recovered from the water after apparently falling in while trying to reach a lifeboat.

Over 140 passengers were still stranded on the vessel on Monday morning.