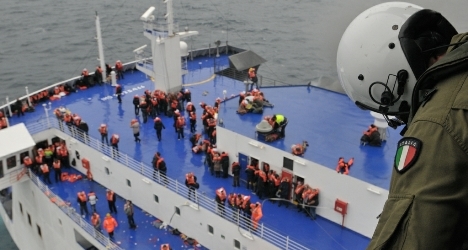 More than 36 hours after he sent out a distress signal to alert coastguards that he had lost control of his ship because of the fire, Captain Argilio Giacomazzi handed over to Italian navy officers at 2:50pm.

After a drama in which seven people died, it was a dignified handover that could not have been further removed from the conduct of the last Italian sea captain to make global headlines.

Francesco Schettino, the captain of the Costa Concordia, is currently on trial for manslaughter after abandoning his giant cruise ship barely half an hour after ordering the launch of lifeboats.

Dubbed "Captain Coward", he admitted in court this month that he had been showing off when he steered the ship onto rocks off the Tuscan island of Giglio in January 2012, triggering an accident which cost 32 passengers and crew their lives.

Schettino also presented the court with a new version of his widely derided claim that he had "tripped and fallen" into a lifeboat, saying it was gravity rather than cowardice that had forced him off the giant vessel.

The option of leaving before all passengers and crew had been evacuated would never have occurred to Giacomazzi, according to his daughter Giulia.

"I cannot wait to give him a big hug," she said as the drama unfolded over the weekend.

"This is a very difficult time for our family but the one thing I am sure of is that my father will have done everything possible to ensure the safety of his crew and the passengers.

Giacomazzi, 62, is a vastly experienced seaman who hails from near La Spezia, the naval port on the Italian Riviera.

"I last spoke to him on Saturday evening. Everything was going smoothly. Then we heard about the accident and we couldn't get in touch with him.

"But I have faith in my father. As soon as we know the port the ferry will be taken to, we will go immediately to meet him."