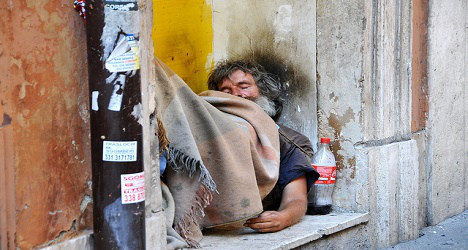 Francesca Danese, Rome's councillor for social welfare and housing, has called on the city's churches to open their doors to the homeless as temperatures plummet. File photo: FaceMePls
"I invite all churches to open, because the big chill forecast for today scares everyone, and those who live on the street are defenceless," the councillor was quoted in Corriere as saying, while also calling on volunteers and religious associations to "open their spaces to the homeless".
"Rome is the city of Pope Francis," she added, in reference to the Argentinian leader of the world's Catholics, who has made concern for the poor one of the defining themes of his papacy.
San Frumenzio church in Prati Fiscali was the first parish to respond to the appeal.
Some 100 extra beds will also be made available at shelters across the capital, while three metro stations – Piramide, Flaminio and Vittorio Emanuele – are being kept open.
Rome's Mayor Ignazio Marino is reported to have visited the homeless at the metro stops.
"I would prefer not to keep them open," Danese said.
"But it was a necessary solution as many homeless people do not want to go to shelters. The spaces are also big enough for us to be able to distribute food and blankets."
Meanwhile, Red Cross volunteers worked overnight to distribute hot drinks, blankets and medication.
Temperatures in Rome were forecast to hit a high of 7C on Monday, before falling to -1C overnight.
Some 400 sleeping bags were distributed to the homeless earlier this month, a gesture suggested by Pope Francis to mark his 78th birthday.
In November, he ordered showers to be built under the colonnades of St Peter's Square and later said he would raffle off unwanted gifts, including a Fiat Panda, to raise money for the homeless.