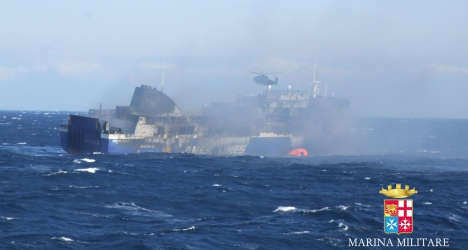 The merchant sailors were on board a tugboat when the cables attaching it to the stricken ferry snapped. Photo: Marina Militare

A ferry tragedy in the Adriatic appeared to be turning into a murder mystery on Tuesday as a fiasco over the accuracy of the passenger list added to questions over safety systems aboard.

The ill-fated ship claimed more lives when two Albanian seamen died from injuries sustained when a cable linking their tugboat to the ferry snapped.

The Italian prosecutor investigating Sunday's disaster said he assumed more bodies would be found on the ship.

Giuseppe Volpe said the fact that a number of stowaways had been among those rescued from the ferry meant "it is likely that we will find other victims in the wreckage."

Nearly 40 passengers listed as having been on the ferry are still unaccounted for but it is unclear whether this is due to them having died as a result of the fire or by drowning, or the result of errors in the ship's manifest.

"At the start, there were people who got into the biggest lifeboat," she told AFP at a hotel in the Italian port city of Brindisi.

"They got it into the water but we were told afterwards that they were not rescued."

With conditions in the eastern Adriatic still extremely rough, Italian authorities decided to try to tow the ferry to port in Albania rather than risk the longer crossing back to Italy.

Amid the uncertainty over the passenger numbers, Italian coastguards and navy helicopters were continuing to scour the waters around the stricken ferry in search of the bodies of nearly 40 people who may or may not have been on the boat when it left the Greek port of Patras on Saturday.

Officially, 437 people who were on board have been accounted for, 38 short of a revised total of passengers and crew released by the ship's operator Anek Ferries

But government ministers in both Greece and Italy have confirmed that there are significant discrepancies between the list released by Anek and the people saved.

Greece's Merchant Marine Minister Miltiadis Varvitsiotis has admitted that one person appeared twice on the Anek list and complained about poor communication with Italy.

"I strongly doubt that all the names on the list are real," he said.

Italian officials have meanwhile acknowledged that the people rescued included an unspecified number of stowaways, including some Afghan nationals, who would not have been on the passenger list.

A prosecutor in the Italian port of Bari was due to outline the terms of a criminal probe into the disaster in which the ship's Italian owner, Anek and its Italian captain are all expected to be investigated for suspected manslaughter.

The accounts of passengers evacuated from the ferry after a terrifying 24-hour ordeal have depicted the Norman Atlantic's crew as being completely unprepared to deal with an emergency.

Many have told how it was either thick smoke or other passengers who woke those who were sleeping in cabins, rather than crew or alarms. Almost every survivor who has spoken about what happened has said they received no instructions from the crew about what to do.

Teodora Doulis, a Greek woman whose husband Giorgios died in the disaster, was among a number of passengers who described the car deck – thought to have been where the fire started – as being slicked by fuel. "It stank of petrol. The ship should never have left port in that condition," she said.

In the absence of leadership from the crew, the intensity of the fire, which made metal surfaces so hot that shoes were melting, led to a panic which exposed the worst side of human instinct, according to survivors.

Ute Kilger, a passenger from Munich, Germany, described how she had witnessed a portly middle-aged man shove past women, children and the elderly to ensure he was winched to safety before them.

"He just went and sat in the basket, which was clearly designed for children. I didn't know whether to laugh or cry," the 45-year-old lawyer told Italian media. Two key questions for investigators will be why the fire gained such force so quickly and why it was not contained in the area where it started.

The ship's owner, Italian company Visemar di Navigazione, has acknowledged that a December 19th safety inspection highlighted a problem with at least one fire door but insists it was fixed before the vessel set sail.

According to Paris MoU, a multinational body which oversees maritime safety standards, the Greek inspectors highlighted problems with more than one fire door as well as the functioning of some water-tight doors, emergency lighting and the availability of life-saving equipment.

The deficiencies were all registered as having been addressed by the end of the day on which the inspection took place.

But Richard Schiferli, Paris MoU's secretary-general, told AFP it was unclear whether all the problems had actually been fixed satisfactorily.

Given that the boat was in an unseaworthy state on the morning of December 19th, investigators will also want to establish whether the crew made any routine or follow-up checks in the nine days between the inspection and Sunday's disaster.