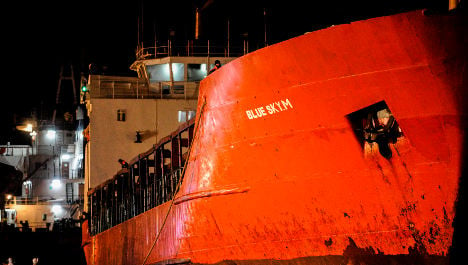 Blue Sky M, the Moldovan-flagged freighter saved from running aground by the Italian coastguard on Wednesday, had docked at the Turkish port of Korfez in October before sailing for Rijeka, Croatia. Ph

Italian coastguards have narrowly prevented two disasters this week off the country's southern coast involving so-called "ghost ships", which seem to have originated in Turkey.

With thousands of dollars to be made from every person desperate to escape war-torn and poverty-hit areas in Africa, the Middle East and Central Asia, smugglers are constantly changing tactics.

Easy access to cheap vessels also appears to be a factor, with industry sources claiming that aged freighters can even be picked up on Ebay.

Following are key questions on people-smuggling in the Mediterranean.

What are the new tactics?

All manner of vessels have been used by people smugglers to cross the Mediterranean. The trend began with fishing boats and rubber dinghies, but with winter weather, some smugglers have switched to fully-fledged freighters.

In the past the smugglers have not hesitated about putting migrants at risk to provoke lifesaving operations, instructing them to slash their dinghies or jump into the water to force coastguards to rescue them.

But this week, the odds were upped dramatically with two migrant ships deliberately abandoned by their crews, placing hundreds of lives at stake.

Why would people smugglers do this?

Simply put, because they can. David Olsen, financial editor of maritime newspaper Lloyds List, said "bargain basement" ships can be had for about less than one million dollars (€700,000), less than the price of a London apartment.

"I can see people meeting over a beer and agreeing a price that is more than the scrap to take it off their hands," Olsen says.

"Ships that are 40 to 50 years old… it's not even worth getting them to India for scrap," he said.

Both the cargo ships involved in this week's incidents are over 40 years old.

What do we know about the vessels used?

Blue Sky M, the Moldovan-flagged freighter saved from running aground by the Italian coastguard on Wednesday, had docked at the Turkish port of Korfez in October before sailing for Rijeka, Croatia.

There were nearly 770 migrants people on board but no crew as the ship drifted on autopilot towards rocks. Greek coastguards were told by a passenger that a crew of up to a dozen men, reportedly armed, had been on board.

The ship got to within five miles – or 45 minutes sailing time – of a disaster before six Italian navy officers were lowered on to the ship by helicopter and succeeded in bringing it under control.

It was allegedly headed for the southern French port of Sete after a journey between Tartus, Syria and Famagusta in Turkish-controlled northern Cyprus.

Six coastguard officers were lowered from a helicopter onto the deck as the Ezadeen drifted some 40 kilometres (25 miles) off Crotone on Italy's heel.

The wars in Syria, Iraq and Afghanistan have been the major contributors to migration to Europe but there is also a steady flow from poverty-stricken states in north and central Africa and central Asia.

Lawless Libya has also become a paradise for smugglers. It has been a record year for people attempting to reach Europe by sea, with more than 170,000 people rescued by Italy in the last 14 months and hundreds, possibly thousands, perishing trying to make the crossing.

The demand for passage to Europe has strengthened the hand of smugglers, says Joel Millman, of the International Organisation for Migration.

"Obviously whole families, whole towns are evacuating Syria, which could mean traffickers are getting used to handling a flow of migrants they can predict will run into the thousands of individuals every month," he told AFP.

He said that with migrants prepared to pay thousands of dollars for passage, "the groups behind the Blue Sky M abandonment could have grossed well over $1 million on just that one short voyage – enough to pay for a disposable craft, crew, vessels to evacuate the crew and, presumably, make any bribe payments that might have been useful in furthering the scheme," Millman said.

Why is Greece in the firing line?

The western port of Patras, which handles the bulk of Greece's maritime traffic with Italy, has been used for years by migrants hoping to sneak on board ferries to Bari and Brindisi.

Rome also has a bone to pick with Athens after the Greek coastguard neglected to board the Blue Sky M and allowed it to continue towards the Italian coast.

Greece's Aegean islands close to the coast of Turkey – where many of the smuggling rings are based – are also a routine landing point for traffickers.

The creation of a 10.3-kilometre (6.4-mile) barbed-wire barrier on the Greek-Turkish border in 2012 also dissuaded smugglers from using the land route into Europe.