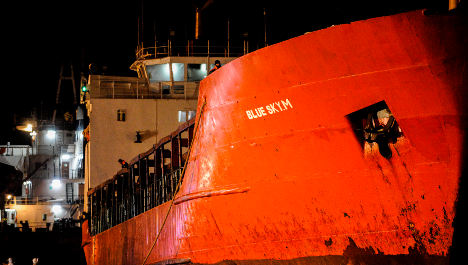 The Blue Sky M cargo ship was intercepted while "drifting" towards the Italian coast last Wednesday, with 770 migrants on board. Photo: Nunzio Giove/AFP

Sarkas Rani, a 36-year-old Syrian was quoted on Sunday by Italian daily La Repubblica as saying he was contacted in Turkey by human traffickers who had posted notices on Facebook offering clandestine passage to Europe for $5,000 for individuals, or $4,500 per person in groups of 25 or more.

"They promised me $15,000 and the possibility of sending my entire family over," Rani was quoted as saying by La Repubblica, which used transcripts of a police interrogation after the Syrian was arrested December 31 in the Italian port of Gallipoli.

The Blue Sky M was intercepted Wednesday by Italian authorities as it was locked on a course towards Italy's coast with 768 migrants aboard.

According to La Repubblica, Rani acknowledged having left the bridge to hide among the migrant passengers once he had set the ship's autopilot toward Italy's southern shore.

Italian naval officers later boarded the Moldovan-registered Blue Sky M just five miles (eight kilometres) before it would have run aground in what would have likely been a violent crash.

Rani said his participation in the people smuggling venture began when he left Lebanon, where he had sought refuge from the brutal war ravaging Syria, to spend time in Turkey.

Once there, Rani was contacted by an acquaintance who knew the Syrian had worked as a ship captain. After the pair met in Istanbul to conclude their deal, Rani was taken with three other men aboard the Blue Sky M, which then travelled to Turkey's Mersin port close to the Syrian border.

After waiting in Mersin two days for his "cargo", Rani says the ship took on an initial group of 30 people the third day, followed by a succession of new arrivals that totalled nearly 800 by December 25th.

At no time, Rani insists, did the Turkish authorities undertake any inspection of the Blue Sky M before he took it out to sea.

"I set the route to Italy myself," Rani said.

Bad weather forced Rani to approach the Greek coast and ask authorities for permission to take protective harbour in a bay until the sea calmed.

Though that request was granted, Rani said Greek officials also did not check the contents of the trafficking vessel – a failure to board the ship Greek coastguard sources previously confirmed to AFP.

After the ship was escorted out of Greek waters by a navy frigate, Rani set course for Italy, taking refuge in the hold with the migrant passengers once he had engaged the autopilot.

After detecting the Blue Sky M and getting no response to radio messages, Italian naval officers were lowered on to the ship by helicopter, then brought it under control and and towed the vessel and its passengers into Gallipoli.

Two days later, another cargo ship abandoned by its crew was intercepted by the Italian navy and towed to port. The 360 migrant passengers of that vessel similarly told authorities they'd paid traffickers between $4,000 and $8,000 for passage to Europe.