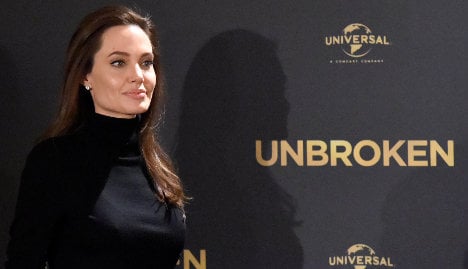 Angelina Jolie's Unbroken will be screened at the Vatican on Thursday. Photo: Tobias Schwarz/AFP

The film, directed by the American actress and set during the Second World War, will be shown at Casina Pio IV in the Vatican gardens on Thursday, Ansa reported.

Jolie, who arrived in Rome on Wednesday with her two eldest daughters, Zahara and Shiloh, said in a statement that the invitation to the Vatican was “an honour”.

“It is also a great tribute to the story I told in Unbroken,” she added.

The film focuses on the real-life story of Louis Zamperini, an American athlete who met Hitler at the 1936 Olympics before being drafted into the Second World War after the Pearl Harbour bombing.

Zamperini, who was born in America to Italian immigrants, spent 47 days drifting on a raft after being shot down from his plane in the Pacific. He was then captured and held as a prisoner of war in Japan for over two years.

A Vatican source was quoted in the British celebrity magazine Hello! as saying that the visit “has been in the works for some time and is part of Angelina’s ongoing work with the UNHCR.”

Jolie, who was named as a UNHCR Goodwill Ambassador in 2001, reportedly “admires the Pope”.

The actress was spotted in the Italian capital’s Piazza Navona on Wednesday afternoon, shopping with her daughters.