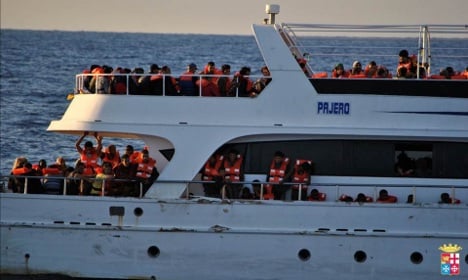 Italy’s Libra ship picked up 163 migrants from the merchant vessel Bourbon Argos, whose crew had rescued them from two boats north of the Libyan coast.

A further 210 migrants were transferred to the Libra after being saved by the Navy’s Maestrale ship south of Lampedusa, Italy’s southernmost island.

The Libra was patrolling Mediterranean waters as part of the EU’s Triton mission, which replaced Italy’s own “Mare Nostrum” (“Our Sea”) migrant rescue operation in November.

Increased violence in Libya, coupled with conflict and instability elsewhere, has led to an unprecedented number of people taking the treacherous boat journey to Europe.

Over 3,200 people are thought to have died trying to cross the Mediterranean in 2014, making it the most dangerous sea route for migrants according to Amnesty International.

More than 170,000 people have been saved by the Italian Navy over the past 14 months, although few wish to stay in Italy once arriving in the country.

New figures from the UN’s refugee agency showed 25,077 people applied for asylum in Italy during the first six months of 2014.

Despite a significant increase in the number of people fleeing the Syrian war by boat to Europe, just 290 applied for asylum in Italy in the first half of last year. Comparatively, 12,077 applied in Germany, 11,551 in Sweden and 1,431 in France.