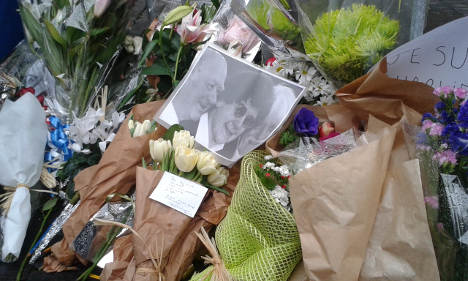 An estimated 500 people gathered outside the French embassy in Rome on Sunday to show solidarity in the wake of the attacks against the satirical magazine, Charlie Hebdo. Photo: The Local Italy

Italians, French and people from all over the world, including Pakistan and India, came together to pay tribute to the 17 who died as a result of the killing spree and in support of free speech.

They held "Je suis Charlie (I am Charlie)" signs, laid flowers and signed a book of condolences outside the embassy at Rome’s Piazza Farnese.

"What happened was a real tragedy but we all have to come together on this, we are all European," Patricizia Ponsicchi, from Rome, told The Local.

As Italian Prime Minister Matteo Renzi vowed that Europe would "win the challenge against terrorism", the solidarity in Rome was tinged with fear over further attacks in Italy and elsewhere.

"Naturally, we do feel a little afraid about any threat against Italy but we have to try and resist this fear otherwise we'll lose our freedom, and without that, what do we have?" added Ponsicchi.

Brigitte, who is French but has lived in Italy for 38 years, said the Paris attacks brought home the reality that terrorism is no longer something that feels "far away from home".

"This attack has made me more fearful," she said.

"You fear catching a plane, getting on a train or even walking in a busy square." Signs of an anti-Muslim backlash emerged in Italy towards the end of last week with Massimo Bitonci, the mayor of Padua and member of the far-right Northern League, saying on Friday that no more mosques would be built in the Veneto city.

"I have so many Muslim friends and colleagues," added Ponsicchi.

"They are amazing, beautiful people. These terrorists know nothing, they are not human: they grew up with hate and ignorance. But Italy now needs to move towards being more multicultural, and we need more help from our government to achieve this."

Franco, also from Rome, said "Italy is very non-multicultural and it needs to change" while Brigitte added that "now is not the time to divide".

Italy is home to 1.7 million Muslims and the country has 750 mosques.

Ejaz Ahmad, a Pakistani cultural mediator and journalist who has lived in Italy for 25 years, told The Local that "mosques are a place of prayer, not a place of threat".

"They bring spirituality and are a place for Muslims to meet. Propaganda tries to make them sound like a place to plan attacks, which is absolutely ridiculous."

While Italy has to accept ethnic groups, Muslims also have to "respect Italian and European laws" in order to better integrate, Ahmad said.

He is hoping to organize a demonstration in Rome over the coming days, in collaboration with French citizens in Italy, to "say no to terrorism" and in support of press freedom.

"We must fight fundamentalism and terrorism everyday."