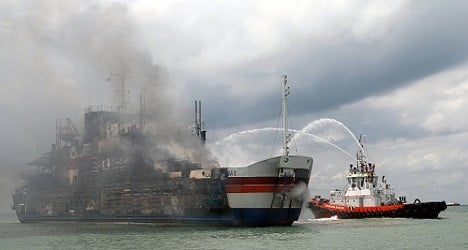 Some of the victims of a deadly fire on the Norman Atlantic ferry may have been attacked by sharks. Photo: Kris Aria/AFP

Autopsies will be carried out in the presence of a marine biologist after investigators said at least one of the nine bodies recovered from the sea presented with wounds resembling shark bites, the reports said.

A fire broke out on the lower deck of the Italian-flagged Norman Atlantic on December 28th, sparking a painstakingly slow evacuation of hundreds of passengers as it floated adrift in the Adriatic Sea.

The high-seas fire lead to the deaths of at least 11 people and forced the rescue of 477 others.

It was thought some of the victims had jumped overboard to escape the blaze.