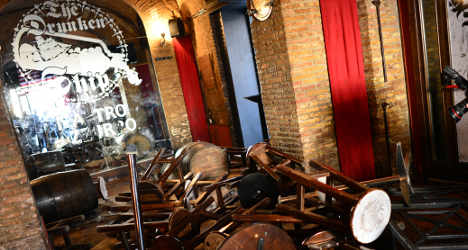 The Drunken Ship bar in Rome after the attack on the Tottenham fans. Photo: Gabriel Buoys/AFP

Mauro Pinnelli was originally given five years and six months in October 2013 for the attack on a group of Tottenham supporters at the Drunken Ship bar in Rome's Campo de' Fiori square ahead of an Europa league game between Tottenham and Lazio.

His accomplice Francesco Ianari was sentenced to four years and five months for the November 2012 attack, which witnesses compared to a "commando raid".

They were part of the 'ultras', an organized group which is responsible for much of the violence that blights football in Italy, who launched the attack on the Tottenham fans, injuring ten.

Ashley Mills, a 25-year-old builder from Essex, a county in southern England, was the most seriously injured and spent several days in hospital being treated for stab wounds.