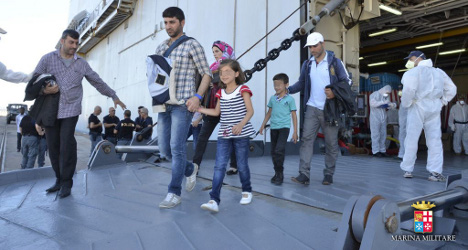 Speaking in Palermo, Alfano said 26 percent of minors who arrived in Italy by boat had gone missing.

“Up to December 31st in Italy 3,707 foreign minors were registered as untraceable, of a total 14,243 minors who disembarked in Italy,” he said.

The proportion of children who disappear in Sicily is higher than elsewhere in Italy, with authorities unable to trace 1,882 out of 4,628 arrivals.

Alfano went on to say the government has launched a “specific mission unit” to deal with the cases of missing children. The aim is to stop them falling into criminal hands and “the exploitation of underage prostitution,” the interior minister said.

“There’s a system of identification which is then linked with the data centre, which is linked to the Schengen system (managing EU borders) and immediately prompts the activation of all European police,” he explained.

More than 170,000 people travelled across the Mediterranean to Italy last year, in what has become the world’s most dangerous sea route for migrants.

Under EU law newcomers must register with Italian authorities and those wishing to seek asylum must do so at their first port of arrival.

For many, however, Italy is simply the gateway to Europe, rather than their final destination, prompting migrants and refugees to evade authorities and continue their onward journey to other countries.