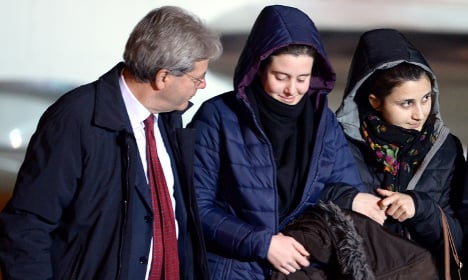 Foreign Minister Paolo Gentiloni told parliament that suggestions that Italy had paid $12 million (€10 million) to the Syrian branch of Al-Qaeda were based on “unfounded rumours” emanating from terrorist organizations which should not be given any credence.

He was speaking hours after aid workers Greta Ramelli, 20, and Vanessa Marzullo, 21, arrived back in Rome, five and a half months after they were seized by armed men near Aleppo in northern Syria.

After thanking the country's intelligence services for their role in the release, Gentiloni added: “As far as ransoms are concerned, I want to stress that in terms of hostage taking Italy respects international rules.

“That is not just the line of this government it is the position of Italy as a country.

“We are against paying ransoms and we take part alongside other countries in multilateral efforts to combat the phenomenon of kidnapping.

“As far as Italians taken hostage are concerned, our priority is always the protection of the lives and physical integrity of our fellow citizens.”

The two women were kidnapped on the night of July 31st-August 1st 2014 and it was not clear exactly who was holding them, Gentiloni said.

Italian officials had to deal with a myriad number of groups and sub-groups amid a media war between different factions which further blurred the situation, the minister said.

He confirmed that Ramelli and Marzullo had left to work in Syria without notifying the Italian authorities, who would have counselled against their trip.

But he defended the idealism of the young women, who were working on their own health and clean water initiative. “It is not acceptable to say they asked for it,” the minister said to cheers in the chamber.