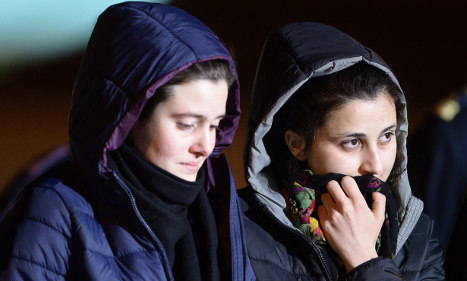 Foreign Minister Paolo Gentiloni welcomed Greta Ramelli, 20, and Vanessa Marzullo, 21, after their flight from Turkey landed at Ciampino military airport near Rome in the early hours of the morning.

Wearing faint smiles and with their heads bowed, the women were rushed into the airport hall without a word or even a nod towards the press.

They were to be taken to hospital for a checkup and then to see Rome's anti-terrorist prosecution office, which has opened an investigation into their abduction.

The women, from Lombardy in northern Italy, disappeared on July 31st near Aleppo in northern Syria three days after they arrived from Turkey.

"I'm feeling such enormous joy: this is the news I have been waiting for for a long time," Salvatore Marzullo, father of Vanessa, said from his restaurant in Verdello near Bergamo in northern Italy, after news of their release.

On Twitter, Interior Minister Angelino Alfano welcomed the news "with great joy and a huge sigh of relief."

The foreign ministry said on Thursday their release was the result of "intense work by team Italy" but officials have so far not released details of how the women had come to be freed by or from their unknown abductors.

Gentiloni is expected to speak to members of parliament later on Friday, according to Italian media reports.

Ramelli and Marzullo were captured by gunmen in Aleppo province while working for the aid group Horryaty, which specialises in health and clean water projects.

They were last heard of on December 31st when a video was posted online showing them dressed in black robes and headscarves and urging the Italian government to do everything it could to bring them home.

The posting on YouTube was entitled "Al-Nusra Front detains two Italian employees because of their government's participation in the coalition against it."

Italy's foreign ministry has given little away about who it thought was holding the women but had denied reports they were prisoners of the Islamic State group.

The liberation of the two women leaves two Italians unaccounted for in conflict zones overseas.

Jesuit priest Paolo Dall'Oglio was kidnapped in Syria in July 2013 and aid worker Giovanni Lo Porto disappeared in the tribal zones between Pakistan and Afghanistan in January 2012. Both men are feared dead.

Italy last year secured the release of two construction workers held in Libya and the country has a track record of paying ransoms to get its citizens home safely.

That approach has been controversial with some of its Nato allies, chiefly Britain and the United States, who argue that handing over cash only encourages further abductions and can end up funding terror attacks.

In theory, Italy signed up to not paying ransoms at a Nato summit in September 2014 but media reports suggested money changed hands in the Libya cases.

Italian officials were able to portray the Libya kidnappings as essentially criminally motivated rather than being the work of hardened terrorists.

But that stance may be harder to maintain if it emerges that the two women had been in the grasp of either Al-Nusra or Islamic State.