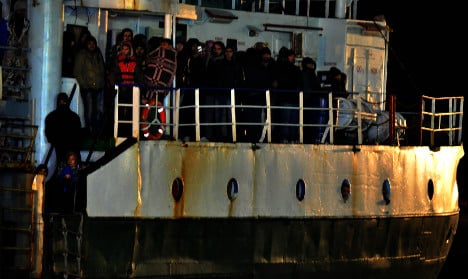 In the wake of two migrant ghost boat dramas over the Christmas-New Year period, the Swiss-based global body on Friday warned that the death toll among migrants trying to reach Europe via the Mediterranean would inevitably rise without coordinated action to take in the hundreds of thousands fleeing conflicts in Syria and elsewhere.

Italy registered 170,000 migrant arrivals in 2014, a four-fold rise on the previous year, and at least 3,200 people lost their lives trying to reach Europe, according to the IOM.

The issue returned to front pages worldwide over the recent end-of-year holidays when people traffickers sent two large cargo boats steaming towards the Italian coast with hundreds of people on board but no crew.

"The emergency is not in the number of people involved or a risk that they will overburden Europe, a bloc of countries with a population of about 500 million people," said Federico Soda, IOM Chief of Mission in Italy.

"The emergencies are the conflicts, instability and great uncertainty in a number of countries close to Europe, which people are fleeing.

"If we put these numbers in perspective, we'll see that Turkey is hosting about 1.8 million Syrian refugees, and Lebanon (a very small country of 4 million people) is dealing with over one million," he said.