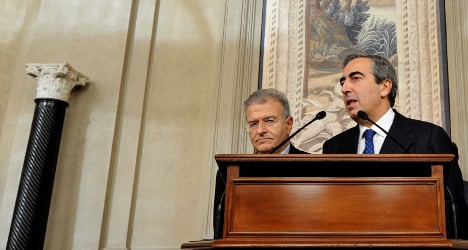 “What’s the problem?” Maurizio Gasparri (R) asked in response to the furore over his comments. Photo: Tiziana Fabi/AFP

Not one to shy away from controversy, right-wing Gasparri on Saturday wrote: “Vanessa and Greta had consensual sex with the guerrillas? And we pay!”

His post came a day after 21-year-old Vanessa Marzullo and Greta Ramelli, 20, returned to Italy more than five months after being abducted while on an aid mission in Syria.

Much has been made of an alleged $12 million (€10 million) ransom paid to secure their release, a claim the Italian government has not explicitly denied.

But the comments made by Gasparri, a member of Silvio Berlusconi's Forza Italia party, appear to have gone too far, with #GasparriFuoriDaTwitter (“Gasparri get off Twitter”) soon trending on the social media site across Italy.

The Senate’s deputy president however defended himself, saying: “I understand that there’s a climate of censorship. I didn’t say anything, I just asked.”

Gasparri read the report about the two women online, he told La Repubblica.

“What’s the problem?” he asked, adding: “My role doesn’t prevent me from asking questions.”

The two women were defended by Laura Boldrini, president of Italian parliament. "There are some controversies which are truly unacceptable, intolerable and not worthy of consideration," she was quoted by Ansa as saying.

Both Marzullo and Ramelli have returned to their hometowns in northern Italy and have since publicly apologized. "It's clear that we have asked for forgiveness. Greta put it perfectly: we are sorry for the pain that we have caused," Marzuollo said.

She went on to say that they could not be held responsible for being abducted and had suffered death threats while being held hostage.

Ramelli said they supported each other, while Marzullo agreed they remained close and were "hand in hand" throughout their captivity.