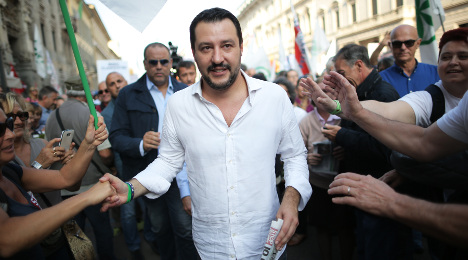 The survey by the Ipsos polling institute for the Corriere della Sera daily found 34.8 percent of Italians would vote for Renzi's centre-left Democratic Party (PD) if an election was held now, compared to 38.3 percent polled in November.

At the European elections in May, the party took 40.8 percent of the vote, but the 40-year old premier has since struggled to implement unpopular reforms in the eurozone's third largest economy, hit hard by recession and high unemployment figures.

The ambitious eurosceptic Northern League, led by Matteo Salvini, 41, is gaining ground — with 12.8 percent of Italians ready to vote for the party, compared to 8.1 percent in November and 6.2 percent in May.

The PD's losses are down to certain categories of voters losing confidence in Renzi, particularly those with low qualifications and housewives, the Corriere said.

"Housewives, on the one hand exposed to the economic crisis, on the other more easily disappointed in their (sometimes Messianic) expectations towards the government, are turning towards the right," it said.

The League "is showing a capacity to attract voters across the board, making conquests almost everywhere, apart from among those with higher education," it added.

Salvini's strategy to win over southern voters "is bearing fruit in terms of his own popularity, doubled from a year ago to second place behind Renzi, and in terms of voters intentions".

Former premier Silvio Berlusconi's Forza Italia (FI) party, hit hard by internal bickering and the legal woes of its veteran leader, drew 14.8 percent of the vote in the poll, down from 16.1 percent in November and 16.8 percent in May.

The anti-establishment Five Star Movement (M5S), Italy's second biggest party, led by former comedian Beppe Grillo, was more or less unchanged, with 20.6 percent of Italians ready to vote for it, compared to 20.8 in November and 21.2 in May.