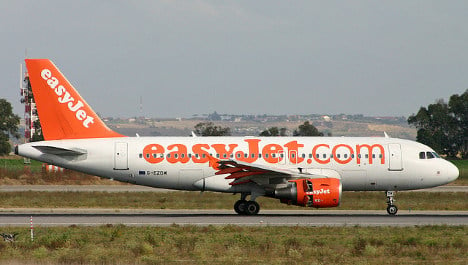 The flight from Rome's Fiumicino airport to London-Luton was within minutes of its scheduled take-off time when Italian border agents boarded the plane and removed the man. File photo: Alan Wilson/Fli

The man, who is awaiting a decision on his request for political asylum in Italy, will be charged with possession of false papers but police do not believe he was linked to any plot, as initially feared.

"We have now confirmed with the authorities that this incident does not relate to any attempted terrorism," an easyJet spokesman told AFP.

"It was just one of the many attempts that are made to get into the UK with false passports."

The flight from Rome's Fiumicino airport to London-Luton was within minutes of its scheduled take-off on Sunday when Italian border agents boarded the plane and removed the man.

The officers were acting on advice from the UK border agency, which spotted discrepencies between the passport details the 33-year-old passenger had entered in his online booking and information they held in their database.

After all bags were removed from the hold and rechecked, the plane took off later Sunday. EasyJet said there had been 124 passengers and six crew on board when the suspect was removed.

The scare occurred on the same day that Italy announced a Pakistani was among nine foreigners expelled from the country since December because of suspicions they could be involved in jihadist attacks.

The others expelled were five Tunisians, an Egyptian, a Moroccan and a Turk.

The alarm comes almost a week after a bomb alert at Rome's Fiumicino airport forced officials to evacuate a Vienna-bound flight shortly before take-off after a passenger told the captain he had explosives in his luggage.