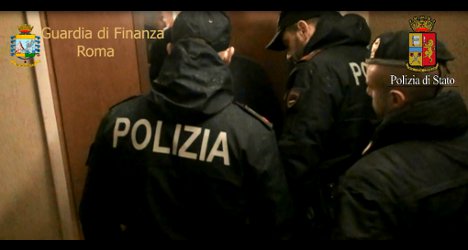 In the course of the arrests and related raids, officers seized some 600 kilos of cocaine. Screenshot: Guardia di Finanza Roma/Polizia di Stato

Based in the impoverished southern region of Calabria, the 'Ndrangheta is said to be behind most of Europe's cocaine business, and is regarded as the most powerful mafia organisation in Italy.

The dawn sweeps came two months after a similar move against 'Ndrangheta cells in and around Milan, which provided the strongest confirmation yet of the secretive syndicate's expansion outside its southern heartland.

Tuesday's arrests were made following revelations that emerged from an investigation into the 2013 murder of Roman mobster Vincenzo Femia. Police now believe that killing was motivated by the desire of two 'Ndrangheta clans operating in the capital to carve up the lucrative local cocaine market between themselves.

In the course of the arrests and related raids, officers seized some 600 kilos of cocaine, sizeable quantities of hashish and a stash of firearms, as well as documentary evidence of the arrested suspects having been initiated into the mafia group, the police said.

The bosses of 'Ndrangheta's semi-autonomous Roman offshoot were reported to have lived in the capital for years, and to have established their own links with cocaine producers in Colombia and smuggling kingpins in Morocco.

Police said the Roman operation had been dismantled partly on the strength of testimony from one of the four men arrested for Femia's murder, identified by Italian media as Gianni Cretarola.

"Rome is considered strategic for the 'Ndrangheta," Rome prosecutor Michele Prestipino told a press conference. "They have a presence in Rome, we can't yet say they made it a base but it is no less dangerous for that."

Officials said the 'Ndrangheta arrests were unrelated to an ongoing probe into a mafia-style criminal network that allegedly held sway over Rome's city hall, skimming off millions in public funds.

More than 100 people, including a former mayor and other prominent local politicians and business figures, are under investigation in a scandal that erupted in November, and is referred to as "Mafia Capitale".

The arrests in Milan in November led to police releasing previously-unseen footage of secret 'Ndrangheta initiation rites. Secretly-filmed recordings showed mobsters being inducted into "Santa" (holy) membership to the mob in a style that would seem outlandish if it had appeared in a Hollywood film.

New members swore allegiance "in the silence of the night and under the light of the stars and splendour of the moon" to "safeguard my wise brothers".

Once inducted, the new members are told they are expected to be their own executioners should they stray from the 'Ndrangheta code. Under what is termed, an "oath of poison", they are told they must be willing to poison or shoot themselves if they betray their brothers.

The name 'Ndrangheta comes from the Greek for courage or loyalty. The organisation's tight clan-based structure has made it difficult for authorities to penetrate.