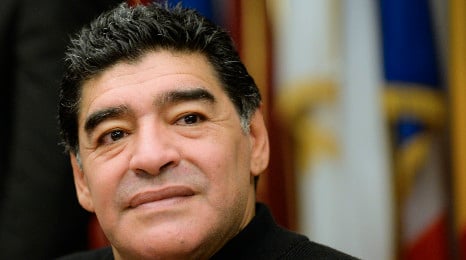 Diego Maradona is embroiled in a long-running dispute over an alleged unpaid tax bill in Italy. Photo: Andreas Solaro/AFP

The former Napoli player is embroiled in a long-running dispute over an alleged €40 million unpaid tax bill that was racked up during his time with the Italian side between 1984 and 1991.

Tax agents started to pursue the 54-year-old in 2001, using tactics that included stopping him as he stepped off an airplane and confiscating two Rolex watches and a diamond earring in a hotel room.

Maradona is accused of making a number of defamatory comments in 2012 in which he said he was a "victim of persecution" by Equitalia, whose pursuit was based on "false documentation" and "irregular procedures", Il Giornale reported.

Moves towards freezing his assets in Italy began in October 2013 but were suspended by a Naples court last August due to new evidence that showed "no tax violation" ever existed against Maradona, his lawyer Angelo Pisani told The Local at the time.

A court will decide in March whether to send Maradona to trial.

He also played in the Vatican’s Match for Peace in Rome last September.