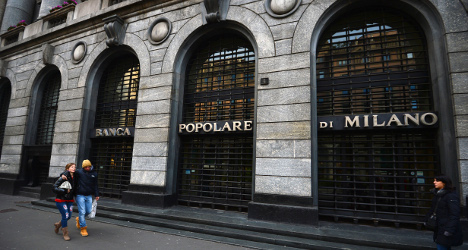 Shareholders in the lenders are currently awarded one vote regardless of how many shares they own, but critics say this has given local banking unions – often entwined with local communities and politics – too much control over strategy.

The prime minister said the ten largest lenders would be affected and they would have 18 months to comply with the new rules, which were being brought in because "our banking system is solid, healthy and serious, but it needs elements of innovation."

In a nod to the customer, the reform also aims to ease the process of transferring current accounts and take some of the sting out of the hefty fees.

Parliament has 60 days to approve the decree, during which time Renzi will need to win over sceptics within his small coalition ally, the NDC party, including Deputy Prime Minister Angelino Alfano.

The anti-establishment Five Star Movement (M5S) has also slammed the decree, saying medium-sized banks were under attack: "With an unprecedented blitz, Renzi is getting ready to sell off the strongboxes of Italian savings to high finance."