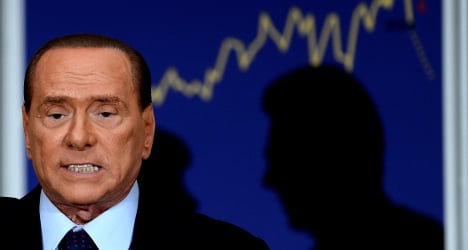 Seven-time European champions Milan are in danger of failing to qualify for the lucrative Champions League for the second consecutive season if they fail to secure at least a third-place finish in the current campaign.

Last weekend's shock 1-0 home defeat to Atalanta led to speculation that former Italian prime minister Berlusconi, who has overseen the most successful period in the club's history, was ready to call it quits. Missing out on the Champions League could cost the Milan giants a potential 50 million euros (£57.8m).

However Berlusconi issued a brief statement on Wednesday saying: "Despite numerous denials, rumours of a possible sale of Milan are circulating again. President Silvio Berlusconi confirms, once again, that they are without foundation."

However, Milan's latest reverse has dented confidence and piled the pressure on ahead of Saturday's trip to high-flying Lazio, who are fifth, two points behind Napoli.

With Napoli, Sampdoria, Lazio, Fiorentina and Genoa all ahead of Milan, and city rivals Inter on their tails, French defender Philippe Mexes admits that reaching their objective of a third-place finish is "becoming hard".

"We have to earn as many points as possible because it is becoming hard," Mexes told the Milan Channel.

"We can't look for excuses, the ball is in our court. We have to get a good result against Lazio, and start playing well to regain confidence.