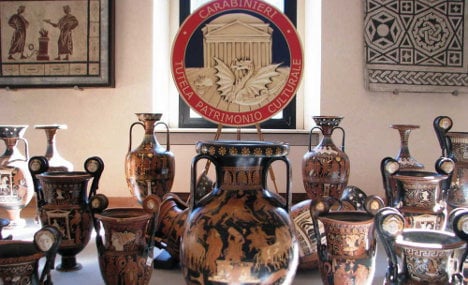 Police said the looted items were worth around €45 million. Photo: MiBACT

Culture Minister Dario Franceschini said it was the country's "largest discovery yet" of looted works and consisted of 5,361 pieces, including vases, jewellery, frescoes and bronze statues, all dating from the 8th century BC to the 3rd century AD.

The archaeological treasures came from illegal digs across Italy and "will be returned to where they were found", the minister told reporters.

Police said the items were worth around €45 million ($52 million) and were sold across the world with forged certificates of authenticity.

The hoard was discovered as part of an investigation into Italian art dealer Gianfranco Becchina, who owns an art gallery in Switzerland, and his Swiss wife.

The probe, which also involved Swiss police, revealed the existence of a sophisticated smuggling network between the two countries and prompted raids on several warehouses in Basel where hundreds of artefacts were recovered.

Carabinieri general Mariano Mossa, who heads a special Italian police unit specialising in stolen art, said the looted works were sent to Switzerland to be restored before being sold in Germany, Britain, the United States, Japan and Australia using counterfeit provenance papers.

Becchina was detained by Italian police while his wife was arrested by Swiss police.

The Italian authorities have promised to put the artefacts found in the raids on display to the public.