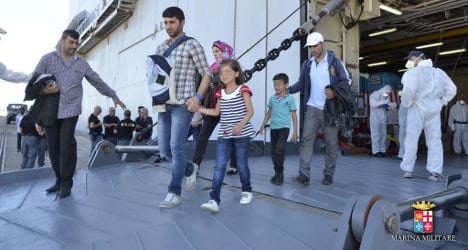 Italy has complained that it lacks the capacity to deal with the rising number of arrivals by boat. Photo: Marina Militare

Delivering a keynote speech in Stockholm, Antonio Guterres, the UN high commissioner for refugees (UNHCR), told reporters that he wanted the EU to force its nations to more equitably handle a spike in asylum seekers.

"We are ready to support political initiatives within Europe, for instance, aiming in some situations to have forms of quota distribution," Antonio Guterres, the UN high commissioner for refugees (UNHCR), told reporters.

He said that while asylum seekers generally enter Europe through Greece and Italy, nearly half of all asylum requests last year were presented in Germany and Sweden, a sign of the continent's lopsided distribution.

The rush of refugees into Europe comes as the number of people driven from their homes by conflict and crisis topped 50 million, a first since the Second World War, according to the UNHCR.

Many refugees choose to seek asylum in northern Europe rather than following EU immigration rules and applying where they first arrive. Sweden has already called on other EU states to take a greater share of refugees.

Greece and Italy have also complained that they lack the capacity to deal with rising numbers arriving by boat, with human rights groups criticising both countries for "push-backs" of migrants legitimately seeking asylum.

"Something is wrong in the way the system is working," said Guterres, a former Portuguese prime minister, calling for "a European solidarity mechanism".

"Quota systems are always an extreme solution," he added. "Ideally, the system would work naturally to produce a fair share among European countries."

POLITICS
Why are France and Italy rowing over migrants and what are the consequences?
Url copied to clipboard!