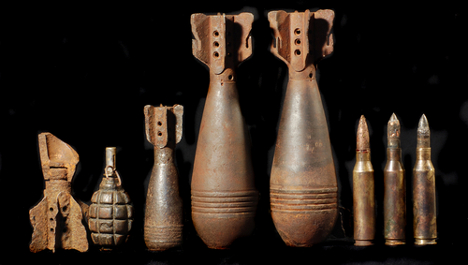 The Second World War weapons pictured are not those looted in Italy. Weapons photo: Shutterstock

Those arrested are allegedly part of the Franco clan of the ‘Ndrangheta mafia in Reggio Calabria, the regional capital which sits at the toe of Italy’s boot.

As well as being accused of a string of crimes including extortion and drug trafficking, they are believed to have robbed explosives from a nearby warship.

The Laura C Italian Navy ship sunk off the Calabrian coast during the Second World War, and has since been looted by the ‘Ndrangheta mafia, Rai News said.

Bombs and other weapons reportedly went to bolster the arsenal of the ‘Ndrangheta mafia, which has risen in recent decades to become one of the world’s most powerful organized crime groups.

In this week’s raids police also seized around €10 million worth of assets, including property, vehicles and works of art.

Reports of the weapons haul come just days after a Second World War bomb disappeared in central Italy. Bologna’s prosecutor opened an investigation after a 70cm unexploded bomb vanished from Fontanelice, where it had been spotted in December after a river flooded.

Removal of the bomb was set for January 15th, but the explosive was robbed a few days before, Corriere di Bologna reported.

The theft was described as a “very dangerous” and “stupid” act by Valter Giovannini, spokesman for the prosecutor.