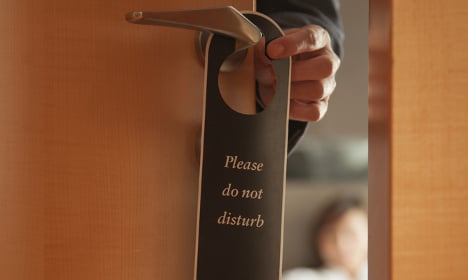 The victim was allegedly attacked for complaining about his neighbour's noisy sex life. Door sign: Shutterstock

Frustrated by his neighbour’s noisy lovemaking in Rosta, a town in Turin province, the 34-year-old tenant began hitting his ceiling with a broom.

But the 44-year-old man upstairs ignored the subtle plea, prompting his neighbour to go knocking on the door.

The younger tenant met with a violent reaction, and was allegedly stabbed three times by his angry neighbour, Rai News reported.

While the victim was not seriously injured, he was taken to hospital while the suspected attacker was arrested for attempted murder.

Elsewhere in northern Italy, a group of a dozen neighbours took a tenant to court over his rowdy love life. The 42-year-old man from Vigodarzere was found guilty of stalking his neighbours, by disturbing them with “screams and moans” whenever he and his girlfriend had sex.

Lovers have also been causing trouble in Sweden, where a woman was evicted after neighbours complained 16 times about her noisy sex life and music. The 50-year-old woman reportedly ignored a tenant banging on the wall to quieten her down, while neighbours complained of having to wear earplugs.