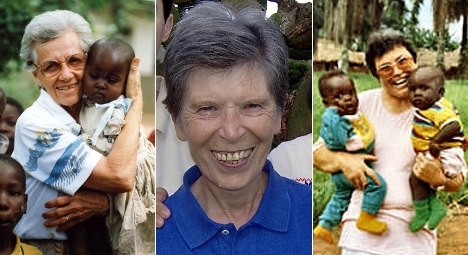 "No one should be prosecuted for legitimately exercising his fundamental right to freedom of expression and opinion," said Ravina Shamdasani, spokeswoman for the UN human rights office.

Bob Rugurika, the director of the popular, independent African Public Radio (RPA), was arrested in mid-January after broadcasting the purported confession of a man claiming he was one of the nuns' killers.

For broadcasting the alleged confession and refusing to give up the self-proclaimed killer, Rugurika was charged with complicity in the murders, among other things, and could face up to 20 years in prison.

A Burundi court earlier this week denied him bail.

Shamdasani warned that the case raised "serious concerns about the exercise of the freedom of expression in Burundi, particularly ahead of the upcoming elections."

"We have previously urged the government to review the media law, which requires journalists to reveal their sources when they report on issues such as state security and public order," she told reporters in Geneva.

"The legislation leads all too easily to infringements of freedom of expression," she cautioned, adding that the UN rights agency would closely monitor his case.

The three Roman Catholic nuns – Olga Raschietti, 83, Lucia Pulici, 75, and 79-year-old Bernadetta Boggian – were murdered at a convent north of Bujumbura in September. The purported confession contradicted a police account of the crime and implicated a top official.

Washington also took issue with Rugurika's detention this week, saying the case raised "troubling questions about freedom of expression and the independence of the Burundian judiciary."

Some 150 Burundian journalists and civil rights activists gathered outside the courthouse in Bujumbura on Tuesday to demand his release.