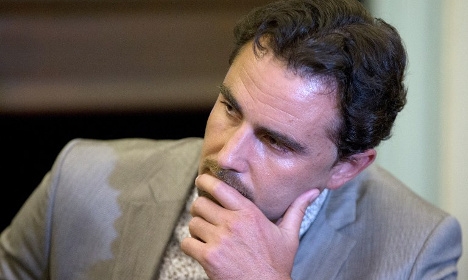 Hervé who? Why have I never heard this name before?

Perhaps you haven't been following closely enough. He has been making headlines since 2008 ever since he leaked information to the French government about a mass Swiss tax evasion scheme.

But on Sunday, the scandal went global, as France's Le Monde and other newspapers revealed the extent of how Swiss-based HSBC's Private Bank allegedly helped tens of thousands evade the tax man.

Explosive details about the HSBC scandal emerged, with figures showing that €180 billion was deposited by 100,000 wealthy individuals around the world. Le Monde said the revelations will "shake the international financial industry to the core."

Over 7,000 wealthy Italians were also among those linked to the Swiss accounts.

Hervé Falciani, a Frenchman of Italian origin, was the man who blew the whistle and allowed the whole scandal to emerge.

The whole scandal really kicked off in France after he fled his job as an IT worker at the Geneva branch of HSBC private bank to come to France in 2008, where he handed confidential information to the then French Finance Minister Christine Lagarde.

This is why the leaked information is sometimes referred to as the "Lagarde List".

The reason it interested France was that the list contained the names of 6,300 French nationals, who deposited around €5.8 billion out of sight of the French taxman.

So he's a French Edward Snowden?

Indeed, some have compared him to the former US spy. In 2013, German newspaper Spiegel conducted an extensive interview with him (published in English here) where they asked if he felt "a kinship" to Snowden. He responded in the affirmative, adding that he had even tried to contact the American.

"It's important that there are people like Edward Snowden, who speak the truth and point out systemic problems. We could ask whether we even need intelligence services, but I believe the answer to that is yes. What we certainly don't need are governments telling us what is good for us," he added.

In the interview he also took aim at HSBC saying that "it created a system for making themselves rich at the expense of society".

So presumably he's cheesed off a lot of people?

Indeed. A lot of people are after him – including the Swiss police, who are trying to catch him for violating bank secrecy laws and for industrial espionage.

He has been accused of trying to leak the information to customers in Lebanon before he gave it to France. It's understood that Falciani is constantly in the presence of several bodyguards, and has even spent months in a Spanish prison after Switzerland issued an international arrest warrant. He was later released after Spain refused to extradite him.

Tell me some more about Falciani himself. What's he like?

Falciani is a 43-year-old father of one. He was married when everything kicked off in 2008, but isn't anymore. In a long and rollicking recount of Falciani's story published by the International Consortium of Investigative Journalists (ICIJ) on Sunday, the Frenchman is said to consider himself as "part James Bond … and part disappointed idealist."

The ICIJ painted him as quite a colourful character indeed, reporting that he regularly wears disguises and travels under false identities.

Business Week took it a step further in its own interview with him in August 2013, which was published with a picture of the Frenchman with his hands on his hips in front of the Eiffel Tower.

"With his computer-geek credentials and Mediterranean good looks, Falciani is a cross between Edward Snowden and Robin Hood," the paper wrote.

The interview revealed that Falciani has even been kidnapped by agents of Israel’s Mossad intelligence service in Geneva, who are said to have "jumped out of a van, forced him to get in, and took him to the basement of a deserted building".

There, they reportedly asked him if he could help ensure that HSBC would not "continue its practices".

Definitely sounds like Bond to me! So finally, what can we expect next?

Good question – and we don't know the answer. Lately, Falciani has been busy with work for a Spanish political party The Citizen Network X Party, where he had an unsuccessful run for the European Parliament last year. The party, which was founded last year, fights for an end to political and financial corruption.

When it comes to the "Swiss Leaks" scandal itself, you can probably expect a lot more headlines as further details emerge and we see their ramifications. As for Falciani, it's a safe bet that he'll continue to work to evade arrest and extradition to Switzerland where he could face up to three years in prison.