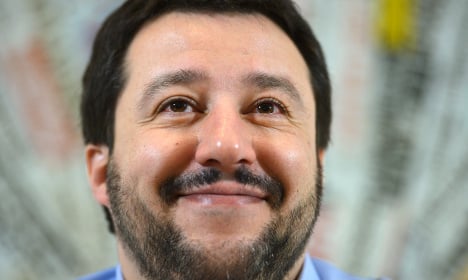 Protesters on Sunday threw eggs and vegetables at the hotel hosting Salvini in the Sicilian capital Palermo, AGI reported.

Insults were also not in short supply, with chants against the politicians and signs telling him to “get lost!”

“We won’t forget the insults against Sicily,” read another, after years of Northern League politicians expressing disdain for southern Italy and calling for autonomy for the north.

Salvini has, however, changed tack recently, riding on a wave of anti-Europe sentiment in an effort to gain national support. His populist standpoint is gaining grounds in Italy, as the Northern League takes advantage of the weakening of Silvio Berlusconi’s Forza Italia party.

As part of his charm offensive, Salvini told journalists he “adores cannoli”, the sugary Sicilian desserts.

“We’ve already asked for forgiveness for the tone of the past…[Sicilians] are a people with a head, a brain and a heart,” he was quoted as saying.

Salvini said disaffected members of Beppe Grillo’s Five Star Movement, which won a third of the national vote in 2013, “are knocking at the door of the Northern League”.

Watch a video of the Palermo protests against Salvini: