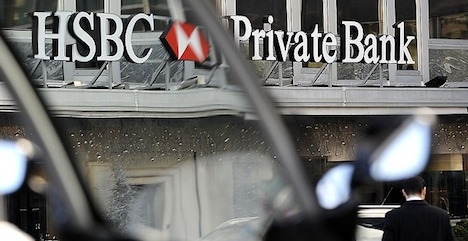 The Swiss arm of British bank HSBC may have helped over 7,000 Italians conceal their wealth from tax authorities. Photo: AFP

A data trove of leaked secret bank account files, obtained through an international collaboration of journalists, revealed on Sunday that HSBC's Swiss private bank may have helped 7,499 Italian customers conceal $7.5 billion (€6.6 billion) in secret bank accounts, according to the International Consortium for Investigative Journalists (ICIJ).

Italy ranked number seven among the countries with the largest dollar amounts in the leaked Swiss files, with the maximum amount of money associated with a client connected to Italy being $1.2 billion (€1.06 billion), ICIJ said.

The documents, which cover a period up to 2007 when they were stolen by Hervé Falciani, a French-Italian computer expert working for HSBC in Geneva, contain details of more than 100,000 customers from around the world.

Apart from Briatore, the Italian clients on the list include motorcyclist Valentino Rossi and fashion designer Valentino Garavani.

All claim to not be hiding bank accounts from the Italian tax authorities, L’Espresso reported on Monday.

Although offshore accounts are not illegal, many people use them to hide cash from the tax authorities. But while tax avoidance is legal, deliberately stashing away cash to evade tax is not.

Described as the biggest banking leak in history, the information includes details of 30,000 accounts with total assets of around $120 billion (€105 billion).

The data shows that HSBC may have actively engaged in helping clients dodge taxes, in addition to dealing with individuals involved in unsavoury activities such as weapons and drugs trafficking, and “blood diamonds” dealing.

Names in the files include people sanctioned by the United States, such as Turkish businessman Selim Alguadis and Gennady Timchenko, an associate of Russian President Vladimir Putin targeted by sanctions over Ukraine.

Former Egyptian trade minister Rachid Mohamed Rachid, who fled Cairo during the 2011 uprising against former president Hosni Mubarak, is listed as having power of attorney over an account worth $31 million (€27 million), according to the files.

HSBC has responded to the reports with an admission in a statement to the ICIJ that it is no longer operating in the way it did in 2007.

Like other private banks it “assumed that responsibility for payment of taxes rested with individual clients, rather than the institutions that banked them.”