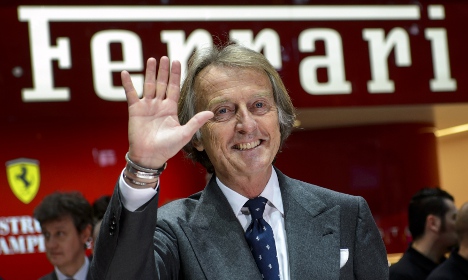 Montezemolo, who led the organizing committee of the 1990 World Cup in Italy, resigned from Ferrari in October and is now head of Italy's national carrier Alitalia.

The 67-year-old has played a role in almost all of Italy's biggest companies from car manufacturing giants Fiat to Unicredit bank and Italy's main business federation Confindustria.

"Luca Montezemolo is and will be the perfect ambassador at international level of an innovative Italy that can be trusted," said Graziano Delrio, state secretary to Italian Prime Minister Matteo Renzi. Renzi announced Rome's bid last December despite spiralling public debts and corruption scandals which have engulfed the Italian captial.

Rome, which held the Summer Games in 1960, shelved plans to bid for the 2020 event two years ago due to concerns over rising costs as the country battled an economic crisis. Turin held the Winter Olympics in 2006.

The American city of Boston is also a candidate while Germany are deciding between Berlin and Hamburg. Paris – who suffered a traumatic loss to London for the 2012 Games – too are mulling over whether to bid.

Durban in South Africa could press to become the first African host of the Games. Istanbul – who were runners-up to Tokyo for the 2020 Games – is also considering a new bid.

Cities must make applications by September 15th and then have until January 8th 2016 to place guarantees. A short list will be chosen by the IOC in May 2016 leaving about 14 months campaigning before a final vote. A final decision will be taken in Lima in mid-2017.