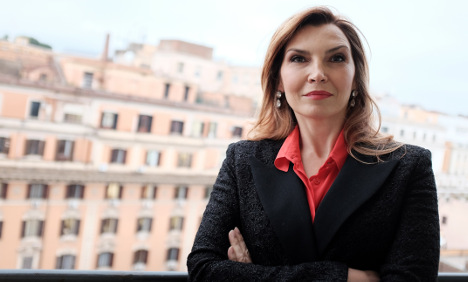 Playing mafia matriarch Imma in Gomorra, a television series that chronicles life in the Naples mob, has made the 46-year-old character actress known across the globe after its Italian producers sold it to broadcasters in more than 70 countries.

And she is not complaining that viewers tend to regard the glamorous and ruthless lead female character with a mixture of fascination and revulsion.

"That is exactly what I wanted – I wanted people to detest her," Calzone told AFP in an interview in Rome.

"After all, I based her on reality."

That reality, she says is a complex one very far removed from traditional images of the women of southern Italy.

"The women of the Camorra are devoted to their men but they are not subservient or powerless," she said.

"It is a very modern type of feminism that exists in the Neapolitan mafia."

Calzone's challenge was to get into the skin of a character who defies her husband Pietro by taking control of his criminal clan when he is in police custody.

To do so, she met with women who had lived with the men of the Camorra, the notorious Naples mafia dissected and exposed in journalist Roberto Saviano's award-winning novel "Gomorrah" and the acclaimed 2008 film of the same name.

"It took me months but finally some of them, ex-wives of Camorra men, opened their doors to me. It was very difficult and I encountered a lot of resistance, but I would never have been able to understand certain aspects of their mentality, their sensibilities without having spoken to them."

This life is hell

Being able to understand the thick local dialect as a native of Naples herself helped Calzone make the connection.

The result is an acclaimed performance that has been central to the high praise the series, directed by Stefano Sollima, has received for its unrelentingly bleak portrayal of the realities of organised crime's grip on some of Naples' poorest neighbourhoods.

"I am no judge or lawyer, only an actress," Calzone added. "My point of view was that of someone who wanted to understand, without justifying, certain ways of behaving.

"What I have understood, certainly, is that this life is hell. Knowing things and pretending not to know them. Knowing those closest to you are going to die, that life is short and money can't help you. It is hell."

Saviano, who has lived under round-the-clock police protection since he wrote his novel, knows all about life being hell. The journalist acted as a consultant on the television series, which tells the story of two clans battling for control of the northern part of Naples and its cocaine trade.

"I don't know him," said Calazone. "But when the series was first shown in Italy, he sent me a lovely letter and made some public statements that really moved me. He said I had been able to incarnate all the Camorra women he had met, which was very nice to hear."

Six screenwriters were brought in to hone the 12-episode series and ensure its depiction of how the Camorra works was faithful to Saviano's vision.

"We stripped this world down, we literally undressed it," Calzone said.

For the actress it was particularly important that the series was shot in Scampia, a district seen as being particularly under the thumb of the crime syndicate. "We showed everything from the inside, without any kind of filter."