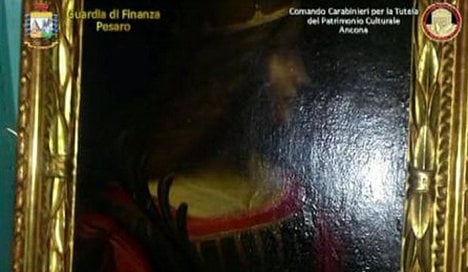 The portrait of Mantua Marchesa Isabella d’Este, a leading woman of the Italian Renaissance, was found among a Swiss collection of artworks in the vault of a Lugano-based bank in 2013.

The painting, which had been missing "for centuries" and now reportedly belongs to a wealthy Italian family based in Switzerland , was found after Italian authorities learned that a local lawyer had been given a mandate to sell it for around €95 million.

It was finally seized amid negotiations with an Arab buyer for close to €150 million, Corriere reported.

The Pesaro unit of Italy's finance police said on Tuesday the potrait had been "illegally exported" and was kept in Switzerland without proper licences.

Using flourescent analysis, experts dated the 61cm x 46.5cm portrait back to the early decades of the 16th century.

The painting was also said to have contained the same paint pigment and primer as those used by Da Vinci, while d'Este featured the same smile as his famous Mona Lisa, which hangs in the Louvre in Paris.

A leading Italian da Vinci expert, Carlo Pedretti, has said he believes the work to be the completed oil version of the artist's sketch of d'Este, which is also in the Louvre.

Other experts have cast doubt on whether the painting is 100 percent the work of Leonardo, suggesting it could have simply been done in his style on the basis of the Louvre sketch, or started by the master and completed at a later date by one or more of his students.

Further tests will be carried out to confirm whether the painting is a Da Vinci once it has been brought back to Italy.

Italy holds one of the world's largest concentrations of artistic heritage and is often the target of art traffickers.

In January, Italian police seized more than 5,000 ancient artefacts in a record €45 million haul after dismantling a Swiss-Italian trafficking ring.

The hoard was discovered as part of an investigation into Italian art dealer Gianfranco Becchina, who owns an art gallery in Switzerland, and his Swiss wife.