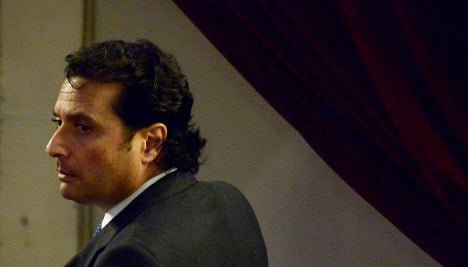 Francesco Schettino, the skipper of the ill-fated Costa Concordia, will soon learn whether he has been convicted of manslaughter and other charges over the 2012 disaster. Photo: Alberto Pizzoli/AFP

With final arguments having been made in the 19-month-trial of the man dubbed "Captain Coward" by the world's media, judges in the case are expected to retire at some point on Wednesday to consider their eagerly awaited verdict.

That may not come until Thursday morning, given the complexity of the prosecution and defence arguments in a trial in which Schettino is the only defendant.

Prosecutors are seeking a 26-year prison term for the 54-year-old captain who has pledged he will be in court to hear the verdict and give his reaction.

Whatever the decision, he will not go to jail immediately with Italy's notoriously snail-paced legal system giving him the right to two appeals against any guilty verdict.

He enjoys the right to remain a free man pending the appeals, although the judges could ask him to surrender his passport.

The flipside of that situation is that Schettino will also almost certainly face an appeal by prosecutors and a second trial should he be acquitted.

Summing up the case for conviction, prosecutor Stefano Pizza said: "Against Schettino there is a tsunami of evidence," adding for good measure: "It is easier for a lawyer to fly than to defend Schettino."

The conclusion of the trial comes just over three years after a disaster that left 32 people dead and led to the ship's captain being charged with multiple manslaughter, causing a shipwreck and abandoning his stricken vessel as it drifted out of control after striking rocks off the Tuscan island of Giglio.

Schettino's defence team concluded their arguments on Monday by insisting that their client had been unfairly made a scapegoat for the shortcomings of the company that owned the liner, Costa Crociere, and some of his crew.

They argued that his conduct may actually have prevented a greater loss of life.

Key to the prosecution case is the idea that Schettino negligently delayed issuing an order to abandon ship after it was holed below the waterline and began to tilt dangerously.

But his defence is that he was fully in command of what he was doing and had correctly calculated that the prevailing tide and wind conditions would carry the listing ship towards the shoreline, at which point an evacuation order would be much safer and quicker to implement.

Schettino testified earlier in his trial that he had wanted to avoid a general panic resulting in passengers throwing themselves into the water.

Experts testified that this was what happened because the delayed evacuation order ensured lifeboats could not be launched from one side of the boat.

Schettino blames his crew for failing to alert him to the rocks and says the primary cause of the 32 deaths was the fact that the ship lost all power because of the failure of a back-up generator, for which he cannot be held responsible.

The captain has admitted sailing very close to Giglio to show off, but he has said this was standard practice intended to impress passengers that was encouraged by the company.

It has also emerged that the rocks hit did not feature on charts available to the crew.

Costa settled potential criminal charges in 2013 by agreeing to pay a €1 million ($1.10 million) fine to Italy, but is being sued by survivors, the Tuscany region and Giglio island for further damages.

Five Costa employees including the helmsman and crisis coordinator were sentenced to up to two years and 10 months each in plea bargains.

Get back on boat

Schettino says he never actually abandoned ship, instead telling investigators that he had accidently fallen into a lifeboat.

In court, he amended the account to say he fell off the side of the boat as a result of the vessel tilting and was then told to stay on the rocks by the ship's owners.

He never clearly explained why he left the bridge and the court heard a recording of a coastguard official angrily ordering the captain back on to his boat, in vain.

The prosecution's sentencing request is based on him getting 14 years for multiple manslaughter, nine for causing a shipwreck, three for abandoning ship and three months for lying to maritime authorities.