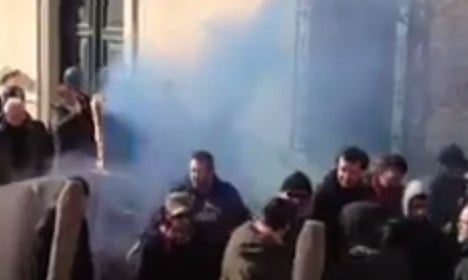 Anti-austerity protesters outside the German Consulate in Venice on Wednesday. Screengrab: Global Project

A banner saying, "We are all Greeks, see you at the barricades" and "No to the ECB, no to austerity" was unfurled outside the Consulate, Venezia Today reported.

The protest, captured on the video below, came as Greece's new left-wing government presented proposals for a renegotiation of its bailout at an emergency meeting with EU finance ministers in Brussels on Wednesday.

Greece's prime minister Alexis Tsipras said on Tuesday that the country "cannot return to an age of bailouts and suppression".

He also said his country would not request a bailout extension despite pressure from German Finance Minister Wolfgang Schäuble.

Earlier on Tuesday, Schäuble told reporters in Istanbul that "it's over" if Greece doesn't want the final tranche of its multi-billion euro aid programme on the current terms, according to Bloomberg.

Tsipras said Schaeuble was making "irrational" suggestions and accused him of trying to make the situation worse.

The protesters in Venice said they were there to “give their support to the Greek people, who are opposed to the financial dictatorship of a ruling class with blood on its hands”.

They will also join protesters for a demonstration in Frankfurt on March 18th, the day the ECB opens its new headquarters.

Tsipras, who was in Rome earlier this month in a bid to drum-up support from his Italian counterparts for his debt proposals, is due to meet German Chancellor Angela Merkel at an EU summit on Thursday.

But he warned the European paymaster against bullying Greece.

"We respect the special economic and political weight of certain peers who are the steam engine, like Germany," he said.

However, "those betting on might and conflict will understand that they are making a tragic mistake. They do not wound the weak, they wound themselves and Europe," he said.