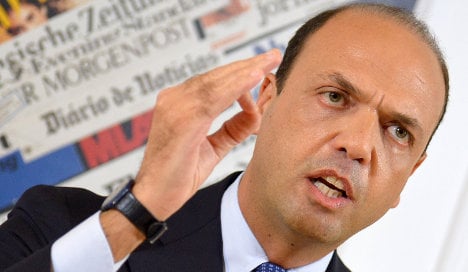 The measures, put together after the deadly shootings by Islamic extremists in Paris in early January, also include confiscating the passports of suspected militants and giving more powers to Italy’s intelligence services, La Stampa reported.

"Before, it was only only an offense to recruit fighters," Interior Minister Angelino Alfano was quoted in the newspaper as saying.

"But now going abroad to fight will be a crime, and the penalties are very high."

Jail terms for anyone joining, supporting or financing a terrorist group will range from three to six years while “lone wolf” terrorists would be jailed for between five and ten years.

The proposals, which still need to be passed in parliament, include tighter control of websites suspected of being linked to terrorism, while the number of soldiers patrolling Italy's streets will be increased to 4,850 as part of the so-called "Safe Streets" operation.

Meanwhile, an anti-terrorism body will be set up and merged with the anti-mafia directorate.

Alfano said in January that nine would-be jihadists had been expelled from Italy since December.