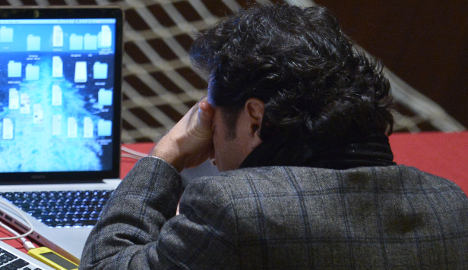 Claiming to be the victim of a plot to make him the scapegoat for a shipwreck that claimed 32 lives, the 54-year-old captain urged the three judges to acquit him.

Schettino, who faces a 26-year prison term if convicted on manslaughter and other charges, said: "I have spent the last three years in a media meat grinder.

"It is difficult to call what I have been living through a life.

"All the responsibility has been loaded on to me with no respect for the truth or for the memory of the victims."

Schettino then began to detail the hounding and character assassination he says he has been subjected to. He was unable to complete his remarks.

Criticising prosecutors who had highlighted his lack of public remorse for the victims, he said: "Pain does not have to be shown in public," before breaking into loud sobs.

Apparently overcome with emotion, he concluded by declaring "basta (enough)" before slumping back down into his seat.

The judges in what has been a 19-month trial with a single defendant were due to retire on Wednesday to consider a verdict. That was expected to be delivered later on Wednesday or early Thursday.

Prosecutors have asked for Schettino to be given a prison sentence of 26 years and three months for multiple manslaughter, causing a shipwreck and abandoning ship with passengers and crew still on board.

He stands accused of recklessly steering the giant cruise ship onto rocks off the Tuscan island of Giglio with more than 4,000 people on board, negligently delaying an order to abandon ship and then leaving the ship himself in a cowardly and unprofessional manner.

Schettino blames his crew for the collision, says the delayed evacuation may have saved lives and insists he fell off the tilting boat and was then ordered by its owners not to go back onboard.

Summing up the case for conviction on Tuesday, prosecutor Stefano Pizza told the court there was a "tsunami of evidence," against the captain, whom he had earlier described as "an idiot."

The captain's lead counsel, Domenico Pepe, told AFP he was confident the judges would not find his client guilty of all the charges.

"I don't expect a verdict until late this evening or Thursday because there are lots of questions to be examined and checked," Pepe said. "Until now the judges have appeared very objective."

The key to Schettino's defence is the assertion made in his final statement: that he cannot be reasonably said to be the only person responsible for the deaths that occurred given the multiple contributory factors.

His lawyers say a poorly-trained crew was responsible for setting the ship on its fatal course and that the practise of passing close to shorelines to entertain passengers was effectively company policy. Charts on board were not accurate and, crucially, the Indonesian helmsman, Jacob Rusli Bin, was unable to understand an order from Schettino to change course just before the collision, the defence contends.

They also argue that it was not the collision, but rather the chaos that ensued due to the ship losing power that was the direct cause of the deaths. Schettino cannot be blamed for this mechanical failure, they say.

Costa Crociere, the company that owned the ship, sidestepped potential criminal charges in 2013 by agreeing to pay a €1 million ($1.10 million) fine.

It is being sued by survivors, the Tuscany region and Giglio island for further damages.

Five Costa employees including the helmsman and crisis coordinator were sentenced to up to two years and 10 months each in plea bargains.

For Schettino, the prosecution is requesting 14 years for multiple manslaughter, nine for causing a shipwreck, three for abandoning ship and three months for lying to maritime authorities.

They have also requested he be sent straight to jail but this is seen as unlikely since Italy's judicial procedures give him the right to two appeals against a guilty verdict.