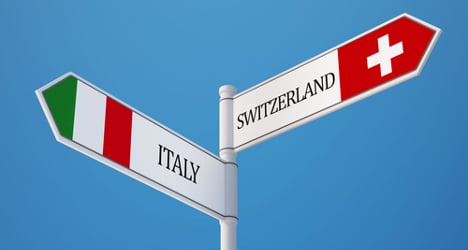 The draft law demands controls on workers who each day commute from homes in Italy. Swiss-Italian photo: Shutterstock

The bill released on Wednesday, to be submitted to political parties, professional organizations, unions and other interested parties for consultation, is the result of a popular vote just over a year ago.

The February 9th 2014 vote saw a hair's-breadth majority approve measures pushed by the populist right-wing Swiss People's Party to rein in immigration from the EU.

This has created a headache for the government, which opposed the move, and which needs to find a way to implement the people's will without ripping up a range of decade-old treaties governing Switzerland's ties with the bloc, its top economic partner. They include a deal giving EU citizens access to wealthy Switzerland's labour market.

Swiss Justice Minister Simonetta Sommaruga, who also currently holds the country's rotating presidency, said on Wednesday that Switzerland would do everything in its power to "square the circle". In the bill, the Swiss government said the proposed limits on immigration would take effect in February 2017.

The government had agreed on a framework for negotiations with Brussels to find a solution that could maintain the bilateral agreements, she said. But the wealthy Alpine country may not have anyone to negotiate with: Brussels has repeatedly said it cannot accept any compromise on its core principle that European citizens have the right of free movement.

The two sides are soon set to start "intense consultations" on the issue, Sommaruga said, but it remains unclear if actual negotiations will be possible. "The positions are very far apart, and there is not much manoeuvring room," she acknowledged.

In line with last year's popular vote, the draft law calls for the reintroduction of work and residence permit quotas for any EU citizens remaining in the country for longer than four months.

It also demands controls on the tens of thousands of people who each day commute from homes in Italy, France and Germany to work in Switzerland.

The draft law, which after consultations will go on to be debated in parliament and could also be put to another popular vote, aims to rein in ballooning immigration. Some 80,000 foreigners, most from the EU, settle in the country each year, and almost a quarter of the country's around 8.3 million inhabitants are foreign nationals.

The draft law would require employers to show no Swiss workers qualify for a position before obtaining a work permit for a foreign national. The rules would however be looser for sectors with large labour shortages, the government said.