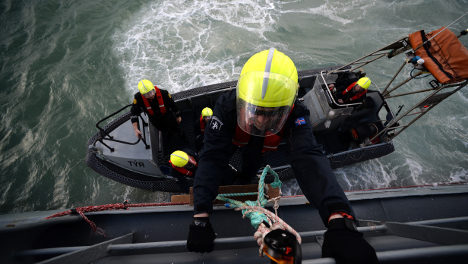 On board the patrol boat, seaman Andri Johnsen steels himself for another treacherous high-sea operation and the possibility that the vessel being pursued could be carrying hundreds of illegal migrants in who-knows-what kind of physical condition.

This time it turns out to be a false alarm, underlying again the difficulties involved in the multinational mission the Tyr is part of, in a week which has seen hundreds more migrants perish in the Mediterranean.

Johnsen knows what it is like to board a ship carrying a consignment of human misery.

In January he was involved in the rescue of 359 migrants from a crew-less "ghost ship" that had been set on a collision course with the coast by smugglers who got it to within sight of Italy then abandoned ship.

Boarding the Ezadeen he was confronted by a grim vision of desperate families crammed together in pens intended for cattle, the parents clutching terrified, hungry children and begging to be saved.

"The conditions on board were very bad…a lack of hygiene, food, water," the baby-faced 26-year-old recalled.

"It was a livestock carrier so it's not made for carrying humans, it had these small boxes like cages with many people inside," he said.

In the past, the onset of winter has led to a sharp drop in the number of migrant boats attempting to reach Italy.

In turn that means they can increase the length of their trips and the size of their human cargoes, ensuring bigger profits.

Johnsen has boarded three cargo ships crammed with migrants already this year and with millions fleeing conflict, repression and hunger in places such as Syria and Eritrea, there is no sign of the flow easing any time soon.

The Tyr is part of a 20-nation operation run by the European borders agency Frontex. Entitled Triton, it was launched in November to help Italy deal with a crisis that has seen more than 170,000 migrants arrive on its soil in little over a year.

The seasoned Tyr is a particularly prized asset, as are the skills of Icelandic seamen used to boarding floundering fishing trawlers in the North Atlantic.

During the 1970s 'Cod War' with Britain, the Tyr was twice rammed by Royal Navy frigate HMS Falmouth.

The ship's skipper, Einar Valsson, explains why traffickers have shifted to bigger boats and targeted the market created by the desperation of many Syrians to get out of their war-torn country.

"It's wintertime and you can get more people on just one boat. There are up to 100 people on the small boats from Libya, but between 300 to 800 people in the cargo ships," Valsson said.

"They take the dinghies from Libya but the cargoes directly from Syria or Turkey."

The longer journeys increase the risks of passengers bolted in the hold getting sick or suffering dehydration and hypothermia, but traffickers can still demand as much as €7,000 ($8,000) for a place.

As few as 12-15 passengers can be enough to cover the cost of picking up a scrapyard boat and some fuel: every extra body after that is pure profit.

"The crisis in merchant shipping means many can no longer afford to run or repair their vessels. There are so many abandoned that countries like Greece, Turkey and Syria have become ship cemeteries," said Italian ship agent Raffaele Monte.

Traffickers either bribe migrants with nautical experience to navigate the ships or sail them part of the way themselves before slipping away.

Automatic Identification Systems (AIS) are often disabled so the ships can ghost out into international waters undetected.

They are then turned on again when traffickers want the ship to be spotted by coastguards. Failing that, the migrants on board are given coastguard numbers and phones so they can call for help.

"The traffickers want the cargo rescued, they're businessmen. Having passengers die during the journey is not good publicity," Monte said.

After its all-night mission, the Tyr docks in Pozzallo in southern Sicily and the 18-man crew tucks into a lunch of smoked hams and cheeses before donning life jackets again to practice their rescue manoeuvres once more.

Out of the wind, seaman Asegeir Gudjonsson settles down with a freshly brewed coffee and a tired smile.

"Coming off a 30 to 40-hour job and knowing you're helping save lives? It feels great, there's nothing quite like it," he said.