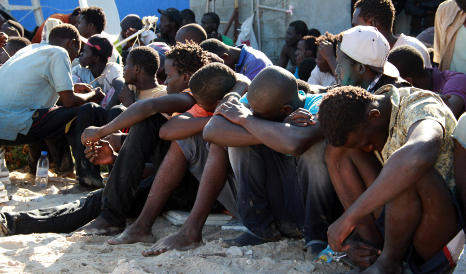 African migrants rest after being rescued by the Libyan coast guard in October. Photo: Mahmud Turkia/AFP

At the same time, up to 600 others were holed up in a large hut near the capital Tripoli, waiting to be put on boats by people smugglers they have paid to get them to Europe, according to a Rome-based Eritrean priest who heads an NGO that works with migrants.

"There are about 600 of them in the hut in appalling sanitary conditions," the priest, Mussie Zerai, told AFP.

He said they had been taken there by members of one of Libya's warring militias and told they would be put on a boat within a week.

"Some of them have been there for two weeks now and they have all paid $1,800 for the crossing."

The migrants are mainly Eritreans but there are also Ethiopians, Somalis and Sudanese nationals. Around a quarter of them are women, six of whom are pregnant.

"When they complain the men shoot in the air to frighten them. The stench has made them terrified of getting sick and they will do whatever the militia men want," Zerai said.

Italy's coastguard has dispatched patrol boats to the aid of the migrants already at sea and alerted a merchant ship in the area to come and help them in what were relatively benign conditions, officials said.

According to international aid organisations, people smugglers forced hundreds of Africans onto rubber dinghies on February 7th with orders to call the Italian coastguard once they were in open seas.

Survivor tales suggest more than 330 died, either by drowning or from exposure to the elements over what was a bitterly cold and stormy weekend.

The tragedy has triggered calls for Italy to resume an extensive search-and-rescue operation off its southern shores.

The navy operation, known as Mare Nostrum, was suspended in November for cost reasons and replaced by a much more limited EU-run mission known as Triton.