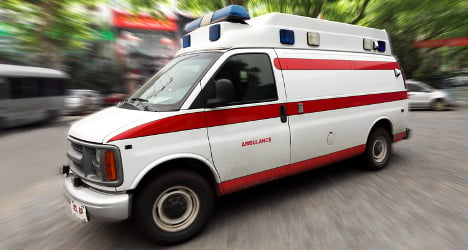 The baby died in an ambulance en route to a clinic around 100km away. Ambulance photo: Shutterstock

Baby Nicole died in an ambulance en route to a hospital in Ragusa, south-east Sicily, hours after being born in Catania where three emergency rooms allegedly refused to admit the sick newborn.

She was born with breathing problems in a private clinic in Catania, leading staff to phone nearby paediatric intensive care units. All three said there was no space for the baby, La Stampa reported.

Medics at the clinic then decided to drive Nicole to Ragusa, a journey of around 100km, but the baby’s condition worsened and she died on the way to hospital.

The newborn’s grandmother, Giusi, said “what’s happened is inconceivable”. The family “wants to know if there was negligence,” she was quoted as saying.

Nicole’s death prompted the Lorenzin to launch an investigation, sending health inspectors to Sicily, and the minister said she would report the findings in parliament.

Crocetta described the three Catania hospitals as “among the most well-equipped and efficient in southern Italy”, and questioned the role of the private clinic.

“They took the decision at three in the morning to take her to a hospital very far away, when they could had taken her to the emergency room of the three hospitals, where they couldn’t have refused admitting her.

“We’re not excluding that staff from the three hospitals could also be responsible,” he was quoted as saying.

Heads of the three hospitals, the private clinic and emergency services central operations are due to meet on Friday morning to discuss the case.

Rita Borsellino, health councillor, called the meeting and said checks would be made by her office. “It’s shameful that it wasn’t possible to find a place in paediatric intensive care in a metropolitan area,” she said.

Her calls for a thorough investigation were echoed by Giuseppe Digiacomo, president of of Sicily’s health commission. “What didn’t work must absolutely be understood, from that fact that there weren’t beds available to the choice to transport the baby in an ambulance instead of a helicopter,” he said.

The director of one of the Vittorio Emanuele Santo Bambino hospital, one of the three under the spotlight, said an internal investigator was already underway.

“I can only say that when the Gibiino private clinic called there were already five babies admitted, of which two worsened during the night. There wasn’t physically a place for another patient,” director Giampiero Bonaccorsi said.

Salvatore Paolo Cantaro, the special commissioner of the Cannizzaro hospital, said checks were being carried out and disciplinary action would be taken if necessary.