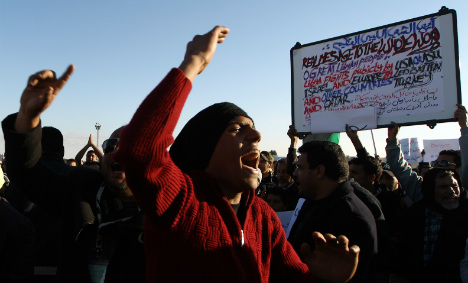 "We reiterate our invitation to our nationals to not travel to Libya and for those already there to provisionally leave the country," the foreign ministry said on its website.

Italian Foreign Minister Paolo Gentiloni told the SkyTg24 television channel that the question of a response from the kind by the United Nations would arise if the fighting in Libya doesn't stop.

Delegates from Libya's rival parliaments held indirect talks this week aimed at ending months of instability in the violence-plagued country.

The talks, the first of their kind involving Libya's internationally recognized government and the rival General National Congress (GNC), were held in the southern oasis town of Ghadames.

Libya, still awash with weapons and armed factions following the toppling and death of dictator Moamer Kadhafi in a NATO-backed 2011 uprising, has two rival governments and parliaments.

At the same time, rival militias are also battling for control of its cities and oil wealth.

The Italian foreign minister stressed the danger of a conflict on the other side of the Mediterranean, adding that Italy was "ready to fight" if international intervention was properly approved.

"We can't accept that just a few hours sailing away lies a terrorist threat," said Gentiloni.

Interior Minister Angelino Alfano spoke of the possibility of an Islamic caliphate "at our door".

At the same time, up to 600 others were holed up in a large hut near the capital Tripoli, waiting to be put on boats by people smugglers they have paid to get them to Europe, according to a Rome-based Eritrean priest who heads an NGO that works with migrants.

Italy's coastguard has dispatched patrol boats to the aid of the migrants already at sea and alerted a merchant ship in the area to come and help them in what were relatively benign conditions, officials said.